Cuban Salsa: How to learn and implement a move

It helps a lot to break the move down into its basic named figures, because it is much easier to remember a sequence of names than a sequence of turn patterns. For a longer move it is important to know where to cut it short if necessary, and where to split it up to make it easier to practice the different parts like separate moves.

Alarde Complicado is Cuban all the way but it is not a typical Cuban salsa move. I regard it more like a better dance school combo, good to practice at advanced level with several difficult basic figures. I will use this move to illustrate how I go about learning a move by breaking it down in order to own it my way.

The Video is from a Salsa class at the “Cuban Dance School” in Copenhagen, 2018, featuring Yosvany Torres as instructor.

Breaking down the move

Alarde Complicado starts with a two handed Vacilala, cross handed, Lead’s right hand on top as is the standard in so many Cuban Salsa moves like in all the moves starting like Sombrero.

The Vacilala start is just one option. We don’t need it. We could use many other moves for the start. If we do start with Vacilala, it does not need to be two handed, and we don’t need to use right to right hand-hold. Right to right handhold is first necessary for the Alarde section but we could wait to cross hands until just before we go into the start position for the Alarde section.

A two handed Enchufla with crossed hand hold is used, and the Lead uses half a right turn (half a “hook” turn), to get into the start position. Of cause Enchufla is also just one option. At any time in a dance, when the Lead has crossed handhold, he can right turn his back to the Follow and be ready to do the Alardes.

A good alternative to a two handed Enchufla is simply to start like a Sombrero and walk into the start position for the Alardes on 5-6-7 by turning a little left this time. The Lead could also just start with the crossed handhold and turn into the position already on 1-2-3 and “thread water” on 5-6-7 looking over his shoulder.

It is important to remember and to practice all the options in order really to own the Alarde section. If a Lead senses that the next few seconds of the music is excellent for the Alarde part, it is nice that you can get into the start position immediately.

The difficult part is to leave the Alarde section fast enough to get into the two handed Enchufla. To start the Enchufla on one with both arm ready, the Alarde on seven continues into the eight count. On 7-8 the left arm is lifted again in order for the right arm to go over the head also witin the 7-8. This is the first tricky part where the Lead and Follow are in danger of getting off the beat unless the Lead gets into Enchufla exactly in time.

Getting out of the Alarde section with the two handed Enchufla followed by the Lead’s Hook turn seems to me the sensible continuation of the Alarde section, but the Hook turn in the video is a little difficult because the Lead at the end goes “down under”. This “down under” is something some Leads just do naturally, other Leads like me need to practice it several time to get it right.

As an alternative to go “down under”, if the Lead wants to skip the rest of Alarda Complicado, the Lead could simply make a normal Hook turn and end up with a crossed handhold but with right-to-right hands below. One way to proceed is to do some Sombrero type of figure, the crossed handhold is already in place except that it is not on top. Just drop the handhold on top and catch the Follow’s left hand again under neath the right-right handhold as you start the Sombrero type of move.

If we decide to do the full Alarde Complicado as in the video, and we do the more difficult hook turn with “down under”, the Lead continues with another two handed Enchufla and an Alarde to himself and goes into Dile Que No. This is of cause also an excellent time to cut Alarde Complicado short, the next couple of figures are just addons that can be replaced with anything else.

After the Dile Que No, the Lead continues with Enchufla and a Lead’s hook turn, performing a Ronde Doble. Yoel Marrero calls this figure for “Giro de Son Doble” in his MCC 2.0 system of optimization, but I prefer the Ronde name because it is understood by any Lead right away.

Ronde is normally done as a single turn, but good Leads like to show how good they are. It is a macho thing. Even I like to do at least one Ronde Doble in each dance. Ronde Doble doesn’t depend on the Follow, the Lead can just do it anywhere in a dance but it helps to use the Follow for stabilization.

Ronde Doble is optional. Just do a single Ronde most of the time, but if the situation is right, and you are in perfect balance and get a good start, go for two turns. Most Leads need to practice it on their own many times before they can can do the footwork, and stomach it. The Lead can walk two hook turns fast but it is difficult to do it fast enough. Or the Lead can turn on the heel of the left foot for the first turn and do the next turn spinning on the ball of the left foot.

In MCC 2.0 Yoel Marrero calls the Continuado for Enchufla Continuado, because he always starts it from Enchufla, but the extra turns are still Coca-Cola turns. I also always start from Enchufla because it is superior. The Lead is much better positioned from the start to support the Follow along the way, and the Lead now walks clockwise instead of counter clockwise.

Starting with <em>Enchufla</em>, the count of the extra turns starts on 5 instead of on one, and because we add turns in pairs, 2-4-6 or 8 extra turns, we always come out of the turning on 3, and the Lead has 5-6-7 to help the Follow recover and get her bearing before some new action on one. If you start the Continuado both from <em>Enchufla</em> and directly from any Coca-Cola turn, you only end up confusing yourself.

9 You must own a move to really use it

At Beginner-Intermediate level you focus on just learning, practicing and using a new move in social dancing. But at advanced level you progress very little if you just learn new moves. You must break them down and analyze them and practice all the options and alternatives to find out what works best in different situations and find out why the move is constructed as it is.

Sometimes a move has an interesting nugget of gold unique to that move. You would like to isolate, learn and implement that nugget also in other moves. In the case of Alarde Complicado, it is the Alarde section. The rest of the move is just a lot of more or less random but very nice figures thrown together, but they can be found in many other combinations and can be substituted with almost anything else. 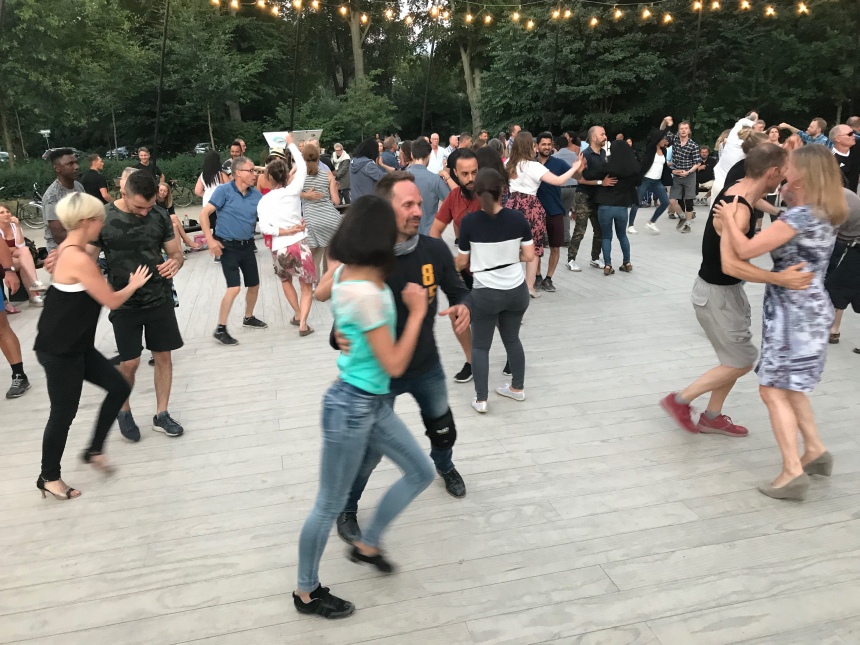